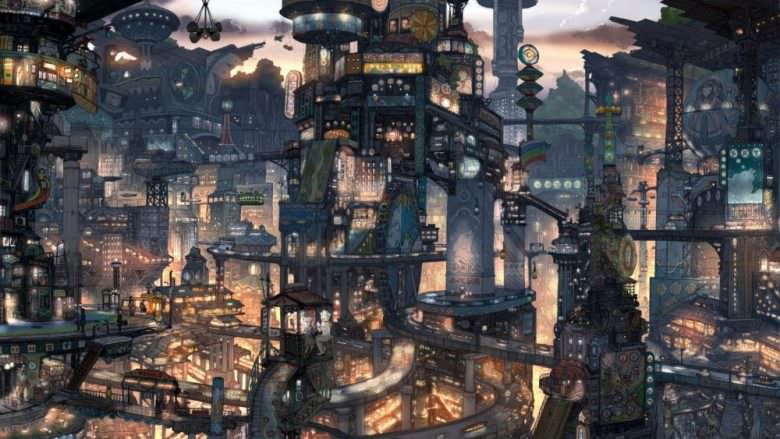 “Really, at your age, what were you thinking?” Jor asked as Rul entered the office, all stitched up. On account of the blood loss and head trauma, he had apparently passed out and fallen overboard during the body retrieval.

“Can’t let the subs have all the fun, can we?” Rul tried to laugh, but stopped when he realized even a small attempt at it caused him a rather nasty headache.

“Too bad about your girl…It’s a shame especially when they’re so young. If you want to see the body, it’s…”

“No, that’s okay,” Rul said, feeling a chill creep up his spine.

“They were friends…Seems Fluke knew the Iron Mongers and showed Lucy the boss’s collection one day.”

“You know it’s not our business anymore from here on out. We found her. It’s up to homicide now,” Jor reminded him.

“I want to know why she had to die,” Rul said bitterly. “She was harmless.” A silly girl, like Fluke said.

“Well, I’m sure you’ll find out soon enough. It seems that the murder was pretty sloppy. They got rid of the body in a hurry and didn’t cover their tracks too well,” Jor told him.

“A couple of Iron Mongers,” Jor said. “You were on the right track.”

The next day, Rul received several files from the homicide division, one of which was a confession to Lucy’s murder from one of the suspects.

“Some things went missing from the boss’s special collection,” it began. The suspect – the murderer – was a rather plump fellow who spoke in a trembling, unsteady voice. “He…he was very angry. Me and Toll were on guard that day, but we slacked off, had a few too many drinks. I fell asleep. He was going to kill us, I swear, if we didn’t find the missing things. Anyway, he told us we shouldn’t dare to come back without the missing…uhm…stuff. So me and Toll, we looked everywhere, we paid a lot of people for information, we showed pictures of this stuff to everyone we came across and nothing. And then just as we were about to give up one evening, we saw her. That girl. She was friends with Fluke, we’d seen her around with him. She came to the office to hang out with us once or twice. And wouldn’t you know it, right there, in her crummy little apartment, all the bosses’ missing…uhm, things…just sitting there on her shelves. I wanted to grab her right then, but Toll said we had to be smart about it. So we came back at night. Black camouflage, untraceable aircar with lifting gear. But wouldn’t you know it, she must’ve gotten wind of what we were planning somehow and all the stuff was gone. She’d cleaned out the entire apartment! So we grabbed only her. We tried to get her to talk, told her all we wanted was the boss’s stuff, but she kept denying she had it… We told her we saw her with it, but she said it was fake stuff, all just virtual, what a bunch of bull, like you can’t spot a hologram when you see one! So we smacked her around a little, but she was so thin, she just hit her head against the floor once and didn’t get up. We didn’t mean to kill her, we just wanted some real answers. It was our asses on the line too…but…”

Rul closed his eyes, to be killed over something so stupid! He later found out that nothing had actually gone missing from Reggio’s private collection, but in fact he had simply wanted to teach his ineffective henchmen a lesson for falling asleep during their guard duties.

A few days after news of Lucy’s death got out, MegK experienced a rather unusual phenomenon. Although the skies were only a little bit cloudy and there was no rain, the city was covered in rainbows. From the always murky level 54 skies to – rumor had it – level 1, everyone could see the rainbows. Even the luscious Lavi Duras commented on it during one of her appearances:

“To wake up to a rainbow, what a wonderful thing!”

The mayoralty saw it as a dangerous collective protest and saw to it that those responsible were caught. It was in fact the Iron Mongers that had done it.

“It’s just a…well, I suppose, rather extravagant apology,” was all that Reggio Castale had to say on the subject. Fluke was suspected to be connected to it, but he vehemently denied any involvement and although Rul could prove for a fact that Fluke had been where the projectors were discovered – Fluke had yet to deactivate his tracking device – he chose not to. After all, in a city as big as MegK the easiest thing in the world was to misplace something.

Except, it seemed, people’s memories. No sooner had Lucy’s case been closed that an order came through for her MM to be returned to the Level 15 lab for immediate destruction. As stipulated in the buyer’s agreement, once the possessor of a MM died, the company took it upon itself to destroy it unless the possessor left instructions otherwise. Rul regretted it. He had taken to carrying it around with him, as if Lucy was really inside it and keeping her memories with him, he could protect her. The thought of their destruction, the erasure of the last bit of her existence made him restless. In the end though, there was no choice.

It was a rainy day when Rul decided to go to the MegK Library. Work had been slow– rain tended to keep the crime rate down. People were afraid that if they were in the streets, they would drown like rats. Rul felt like the government did it on purpose. Who needed water cannons when they could command a perfectly horrid downpour from the weather satellites? The library, a building that contrary to most buildings in MegK, tended to spread in width rather than height, was located at a plushy level 18 where it could be easily accessed by the uppers. It was fairly empty that day. A few people, surprised by the rain, were huddled together by the door. One could not access the library without a membership card. Owning one tended to be a pretty guarded privilege instituted with the purpose of avoiding the use of the library as shelter by drifters.
Rul had received a rather cryptic message from Marcus that morning with the serial number of a book. The library, much like MegK itself was a maze of unparalleled proportions, enough to keep a population of one billion people reading for generations. Because no less than two deaths had occurred due to staff negligence, the library had taken measures to prevent future incidents by implementing a system of avatar guides throughout the complex. All gentle looking humanoid females, always helpful and smiling.

“Mr. Owlen, how can we help you today?” an avatar asked startling him slightly as he had been lost in thoughts and had not realized she had appeared before him.

“I’m looking for this book,” he showed her the code Marcus had sent him.

“If you will follow the arrows to the East Wing’s Art Section on the second floor, my colleague will guide you there.” She gestured to the arrows on the floor that suddenly illuminated beneath Rul’s feet. “Please brace yourself,” and with that the arrow with Rul on it moved forward towards the East Wing at a slow walking pace. Rul always felt like he was being carried by a tortoise whenever he happened to ride the library arrows.

Once at the art section, another avatar appeared and Rul involuntarily smiled.

“Hello, Mr. Owlen, my name is Lucy and I’m here to help you find the book you’re looking for.”

“Oh, Pastoral Scenes on the Moons of Juvenal!” Lucy seemed to have received the information about the book Rul had requested. “It’s one of my favorites!” she smiled and it was as if suddenly the dreariness of the world was nothing but an irritating hum somewhere at the back of his mind.

Originally published as The Invisible Girl, Epilogue 1: Rainbows over MegK and Epilogue 2: Marcus, 9 September 2014 on